This is an updated version of a post I wrote on my former blog a few years back.

I was 11 years old when he was born, and our family was changed forever. He was the cutest baby I’d ever encountered — until my own were born years later — and he grew into a hilarious, wonderful toddler and young child. His mission in life seemed to be making sure that things never got boring in our household. Stories about his various escapades are legendary in our extended family. (One cousin, when she and my younger brother were children, ended almost every Steph story with, “And we were so embarrassed!” Well, everyone but Steph, apparently!) 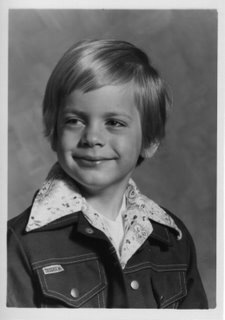 Steph seemed so different from our older brother and me. We were shy, awkward and nerdy, while our younger brother charmed the little old ladies in the church, traded kisses for dimes and quarters, purposefully got lost in stores just for the drama of having us all paged, and turned the kindergarten portion of the school Christmas program into “Stephan and his back-up choir”.

We were too shy to ask for directions and information, while Stephan thrived on talking to everyone everywhere.

I’ve never met a child like my younger brother. He was, in some ways, a bundle of contradictions as a little guy. He could be an annoying pest and prankster at times, and yet he could also be a classy little charmer. Most three year old boys, for example, make a mess of eating an ice cream cone and couldn’t be trusted drinking out of expensive, fragile stem-wear. Not Steph — his table manners were extraordinary, and he could be such a delightful little gentleman.

Stephan brought an exciting new vitality to our family when he was born. I’ll never forget “kidnapping” him out of his crib and trying to hide him in my bed. (His giggles always gave him away when my mother would come searching for him.) He taught me not to take myself so dreadfully seriously during my teenage years. He put up with my awful experimental cooking and pretended that he actually enjoyed the meals I forced upon him. (That, of course, prompted my theory that children don’t have taste buds.) He was deluded enough to think that I was beautiful, even during my most awkward adolescent moments. Steph loved my silliest stories, inspired me to create ridiculous games, made me laugh, and alternated between amusing and horrifying me with his creative ability to turn mundane events into fascinating tall tales that he would then spread far and wide. (No, I never threw up on the Thanksgiving turkey, contrary to what Steph told his entire school.)

As Steph grew older, I discovered how much he added to the adventures I had been enjoying for years. Ah, what I wouldn’t give to turn back the clock, just for a day or two, and relive some of the weekends spent together…

But it wasn’t just in his childhood and teens that Steph proved himself to be the best little brother in the world. His crowning achievement is that he has given me some of the most adorable, wonderful, beautiful, delightful nieces and nephews in the world — and he has made sure there are lots of them!

Steph has so many traits that I admire (and lack). He is generously hospitable; I’m convinced that I could drop in unannounced with my entire family in tow, and Steph would joyously feed us all and put us up, without the slightest hint that we might be inconveniencing him. I am so proud of his people skills, and of how he uses his talents and abilities to work diligently in providing for his family. But what touches my heart the most, and fills it with a mixture of joy and sisterly pride, is that Stephan has become a student of my father and of the Word, and that he and my father are now sharing the pulpit at the church my father pastors. I enjoy his unique, fresh perspective and his commitment to remain true to the Biblical text. Impossible as it would have been for me to believe when we were younger, not once has anything he has preached made me want to cringe, hide my face, or throw something at him. Proof that even little brothers eventually grow up!

My baby brother has grown into a loving husband, a devoted father, a wonderful man. But, as a big sister, I’ll never forget the excitement I felt 45 years ago today, when he made his way into our lives and hearts, and how cute he looked when I first got to see him. I was full of dreams then for what we would all do together, but I had no idea how wonderful that little baby would turn out to be.