I was overwhelmed with the love of God. It came completely out of the blue, with no explanation, no rhyme nor reason, just the awareness and certainty of God’s love filling me on that summer evening back in 1981 as never before. What I felt was not an impersonal love, or a love for all mankind: He loved me — me — after everything I had done, and everything I hadn’t done…despite my every sin and failing…He loved ME.

This amazing sense of His love overwhelmed me in a parking lot of all places. I leaned against my friend’s orange VW squareback, looked at her across the roof of her car, and tried to articulate this incredible epiphany I was having. And then we returned from our errand to have dinner at my neighbor’s apartment.

Only the dinner was a ruse.

After pre-dinner cocktails, my friend became suddenly and mysteriously so ill and light-headed that she went to my apartment to rest. I was urged to stay because, after all, the Italian meal had been fixed in my honor. My host seemed to think it tragic that someone who had been to Italy had never even eaten pasta fagiole, and he had supposedly been slaving over a hot stove for hours on my behalf.

Later, when I asked them to let me leave, when I tried to convince them to let me go, when I begged and pleaded, they refused. Eventually I wanted to die. The next afternoon, I came as close to killing myself as I think it is possible to do and remain physically unscathed.

Almost 28 years later, I sat in a therapist’s office, finally telling the entire story of my rape for the first time, instead of the highly abbreviated one sentence version, or scattered bits and pieces. Before then, I had only shared on a “need to know” basis to very few people.

One of the things I told my therapist was that it was as if God ceased to exist during that whole nightmarish, seemingly endless ordeal. One moment I was being love-bombed by Him…the next I was utterly abandoned.

That’s what immediately came to mind when I saw this on Facebook this morning: 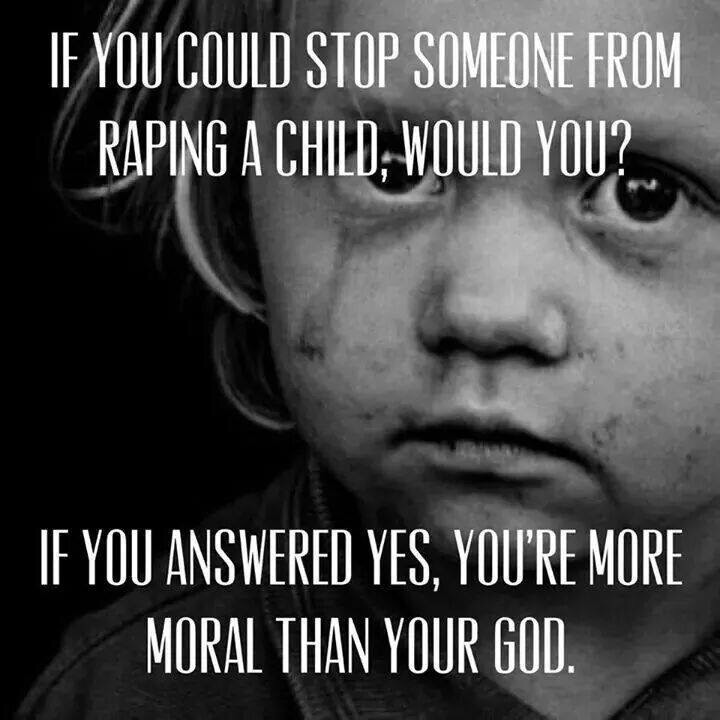 Yes, I was 23 years old when I was raped, but when my daughter was that age, do you think I would have walked away and left her at the mercy of a serial rapist and his accomplice/trainee? Was I more merciful than God? More moral?

There is no easy way to deal with these questions. Flinging platitudes and Bible verses at my pain did nothing to ease it. I had many dark nights of the soul, some so dark they almost consumed and destroyed me. I wrestled with God, to the point that I thought Jacob in the Bible had nothing on me.

Those who are satisfied only with an intellectual approach to God, based on chapter and verse of the Bible, won’t find much, if anything, of value in what I’m about to write…well, except perhaps for the first part. But I don’t believe God has chosen to confine Himself to the pages of His book. He is far too mysterious and wild and great and marvelous for that…and far too personal and immediate and, dare I say it, loving.

1. Donny looked eager to tell me something at the beginning of one therapy session. “I almost called you,” he said, “but I thought it would be better to tell you in person.” During his devotions, he was reading systematically through the Bible, and he encountered a verse he had never noticed before:

“Woe to him who gives drink to his neighbors, pouring it from the wineskin till they are drunk, so that he can gaze on their naked bodies!” Habakkuk 2:15 NIV

Amazingly enough, there was no accompanying verse saying, “Woe to naive and overly trusting stupid idiots who don’t have sense enough to refuse drinks from their sleazy neighbors, who shouldn’t even be drinking with men in the first place, and who sin by drinking too much — you get what you deserve.” Apparently that was my victim-blaming opinion, but not God’s, so I was left to ponder the question my therapist posed: if God hated it when a neighbor got someone drunk In order to look at their naked body, how much more must He hate what my rapists did?

But if that was true, why did God abandon me?

2. I don’t have chapter and verse for this next one. All I can say is that, after much arguing and wrestling with God, there came a time when I just knew that He was there that night. Even though it felt to me, during that terrible night, as if He had ceased to exist, He was there all along.

That was hugely comforting and an amazing breakthrough for me, but it left unanswered the question: why didn’t He stop my rapists?

3. Eventually I came to realize that God places a high value on our free will. (Yeah, I know — Calvinists, you might as well shoot me now.) He didn’t stop Adam and Eve from sinning — and their sin opened the door to all the evil, suffering, and death we must now endure. I don’t pretend to understand this. I don’t pretend to like it. But a God who would overrule free will to stop all child rape would have to do the same for all rape…and all abuse…and all violence…and all betrayal…and all selfish use of another person…and all unloving acts…and where would that stop until we were rendered robots, without free will, forced to love God and all people?

4. I have had to make peace — as much as one can make peace with such tragedy — with the terrible fact that we live in a fallen world, one filled with sin and suffering and death. Part of making peace with that is my belief that this world is not all there is. I cling to a future hope, when all will eventually be made right.

5. I have come to believe in redemption. One day, all will be redeemed. In the meantime, God keeps showing me glimpses of redemption. There was a time when I insisted to my therapist that my rape was so terrible, so dark and ugly, that there was nothing about it that God could possibly redeem. He proved me wrong…but that’s best left for future posts.

1 thought on “Why didn’t God stop them?”